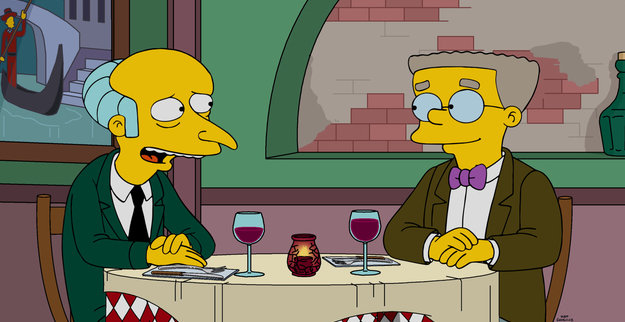 Longtime Writer For The Simpsons: I Finally Outed Waylon Smithers As A Show Of Love For My Gay Son

After 27 seasons, Waylon Smithers finally comes out of the closet on Sunday’s episode of the The Simpsons. As it turns out, there’s a great inside story too. Eric Hegedus reports at the New York Post:

Longtime show writer Rob LaZebnik tells The Post he penned the episode in support of his own 21-year-old son, Johnny, who is gay. “I am a Midwestern guy, so I don’t tend to wear my emotions on my sleeve, but I thought, ‘What better way to tell my son I love him than to write a cartoon about it?’ ” says Rob.

Not that the younger LaZebnik needed confirmation from an animated pop-culture icon. “The revelation that my father loves me is not much of a revelation, thankfully. He’s unbelievably accepting,” says Johnny, a senior psychology major and film minor at Wesleyan University in Connecticut. “We’re as close as a straight dad and a gay son could be.”

Rob says he had the idea for Smithers coming out two or three years before he pitched it. He even showed an early version of the script to his son, who gave feedback and a thumbs-up. “I was really happy that someone who has experience with a gay person in their immediate family was writing the script,” says Johnny.