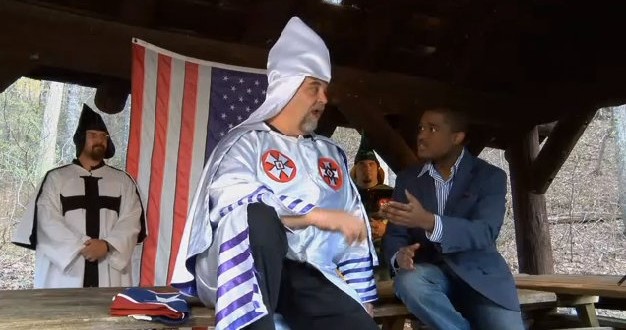 In a sit-down interview with a Richmond news station, the Imperial Wizard of the Rebel Brigade Knights of the Ku Klux Klan said Republican presidential frontrunner Donald Trump is his candidate for President.

The KKK leader, identified by WWBT only as “Imperial Wizard,” also insisted his organization is not a hate group, telling the station’s black anchor, “We don’t hate anyone.”

Asked who he was supporting in the 2016 race, the wizard replied: “I think Donald Trump would be best for the job.”

“The reason a lot of Klan members like Donald Trump is because a lot of what he believes in, we believe in. We want our country to be safe,” he said.

The leader went on to say if Trump were to drop out, he would back Ohio Gov. John Kasich before Sen. Ted Cruz (R-TX), saying Cruz “is not an American citizen” because he was born in Canada.