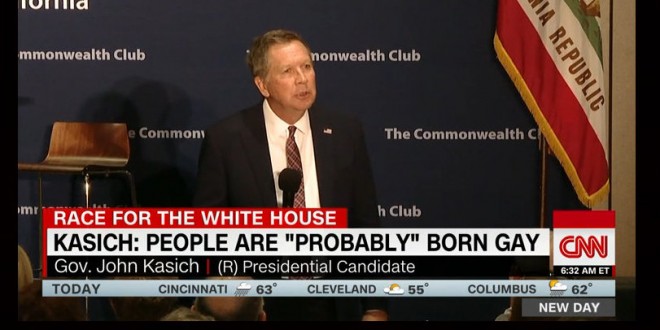 Kelly Bryan, 62, asked Kasich the question at a forum hosted by the Commonwealth of California Club, telling the Ohio governor, “Gay people are human beings and not a lifestyle choice. Please respond without prayer being an answer.”

“In terms of me, I don’t believe in discrimination,” Kasich said. “I think there is a balance, however, between discrimination and people’s religious liberties. But I think we should just try to, like, take a chill pill, relax, and try to get along with one another a little bit better instead of trying to write some law to solve a problem that doesn’t frankly exist in big enough numbers to justify more lawmaking.”

Kasich added: “I believe in traditional marriage, (but) I just went to a gay wedding,” Kasich responded. “My wife and I went to the wedding. It was great, it was fine.”

The moderator twice attempted to move to the next question but Kasich continued to engage the man, who later told CNN that he intends to vote for Hillary Clinton.