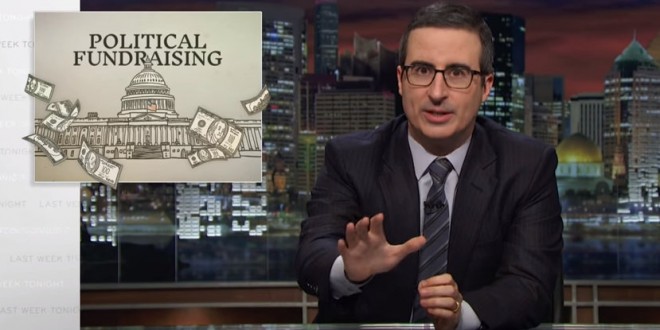 The deep-dive on Sunday night’s Last Week Tonight with John Oliver took a look at the role of money in politics, but not in the we-all-know-there-should-less-money-in-politics sort of way. Instead, the segment examined the hours lost to congressional fundraising, and the mind-numbingly dull process for elected officials to ensure that they stay competitive in their reelection bids.

Oliver pointed out that in the 2014 election cycle alone, members of the U.S. Senate and House of Representatives totaled 1.7 billion dollars in fundraising efforts. “The sheer amount of time politicians spend fundraising isn’t just embarrassing. It’s horrifying,” Oliver continued. “Some say that members can spend anywhere from 25 to 50 percent of their time on it.”

But Oliver’s mockery wasn’t just aimed at the corrupt process; the veteran late night host identified one of the local Washington DC hotspots that has hosted nearly 1,000 Congressional fundraisers in the last decade, a local watering hole named Johnny’s Half Shell. After rolling footage from a Johnny’s (extremely) low-budget advertisement that showed the restaurant’s smarmy namesake Johnny Fulchino, Oliver recoiled, “He is a significant figure in DC! Influential decisions are being made under the watchful eye of a man who looks like Jon Bon Jovi‘s less talented step-cousin Jim Ban Jarvi.”