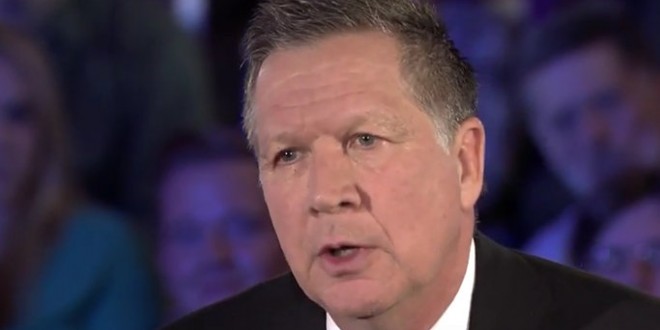 “There could be an effort to pass a Constitutional Amendment. I’m not for doing it. I’m for moving on,” the Republican presidential hopeful said Thursday in a town hall airing on MSNBC. “Exactly where it is now, I’m fine with it,” he said when asked if there are any laws that should be changed to address the issue.

In a landmark decision last year, the Supreme Court ruled same-sex couples have a constitutional right to marry. Many in the once crowded Republican presidential field opposed the ruling, and while Kasich affirmed he believes marriage should remain between a man and woman, he told Matthews that everyone should be “a bit more tolerant.”

The Ohio governor often talks about how he recently attended a friend’s same-sex marriage ceremony. “I don’t think it’s right and the wedding that I went to, they know that I don’t agree with them,” Kasich said. Asked by Matthews what gay couples who love each other should do, Kasich said: “They should love one another. That’s the end of it.”