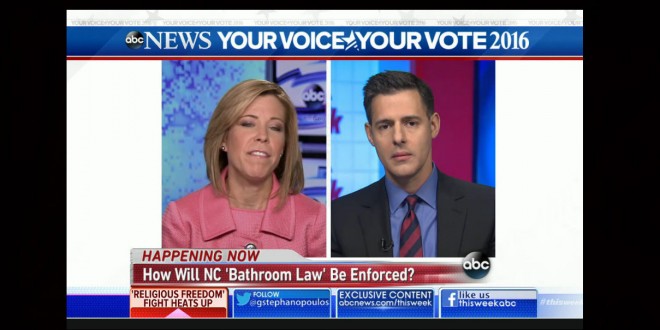 “The idea that this is about safety and security, it’s kind of like when somebody says that they ate all the ice cream in order to make room in the freezer. I mean it’s just obvious that that’s not the real reason. This is about discrimination, particularly against transgender people. And one of the reasons that’s really sad is that our nation’s history of protecting religious liberty has traditionally been about protecting marginalized groups, protecting people of minority faiths against the majority who try to marginalize them.

“Instead, we have a perversion of the notion of religious liberty to further marginalize people who are already vulnerable. There are absolutely no cases of transgender people trying to use these laws in order to commit assault or to threaten people’s safety in bathrooms. Whereas there are many cases of transgender people suffering bullying and assault and violence because they can’t have a safe and comfortable bathroom to use.”

Previous CIA Director John Brennan: We Will Never Waterboard Again Even If Ordered To By Trump Or Cruz
Next Donald Trump’s Kids Aren’t Even Registered To Vote