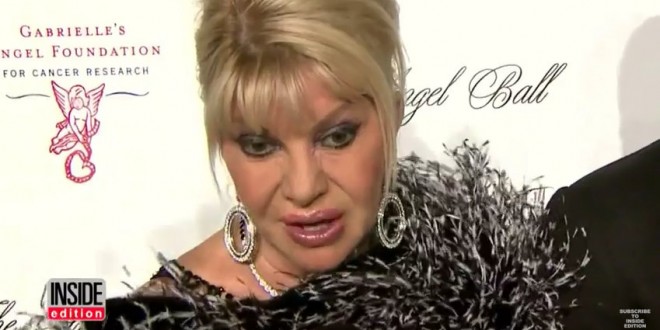 Ivana Trump: If We Don’t Have Immigrants, Who Will Vacuum Our Living Rooms And Clean Up After Us?

While Ivana says she’s not political — “I was born in a Communist country [Czechoslovakia] and I don’t like politics” — she frets that America has lost its prestige. “We have to get it back.” The first step? Adopting Donald’s immigration policies. “And I’m an immigrant,” Ivana says.

“I have nothing against Mexicans, but if they [come] here — like this 19-year-old, she’s pregnant, she crossed over a wall that’s this high” — Ivana lowers her hand to 4 inches above her wall-to-wall carpeting. “She gives the birth in American hospital, which is for free. The child becomes American automatically. She brings the whole family, she doesn’t pay the taxes, she doesn’t have a job, she gets the housing, she gets the food stamps. Who’s paying? You and me.”

“As long as you come here legally and get a proper job , we need immigrants. Who’s going to vacuum our living rooms and clean up after us? Americans don’t like to do that.” Well, Trumps certainly don’t.