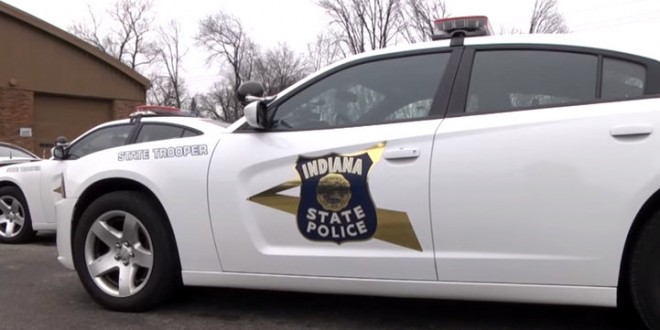 INDIANA: State Trooper Sued (Again) For Grilling Motorist About Her Love For Jesus During Traffic Stop UPDATE: The Trooper Has Now Been Fired

And this is not the first he’s been sued for proselytizing during traffic stops. Via the Washington Post:

Indiana State Police trooper Brian Hamilton pulled over Wendy Pyle in January, according to a lawsuit filed earlier this week. He told Pyle that she had been speeding, went back to his patrol car and returned with a warning ticket.

Then, the lawsuit alleges, Hamilton asked Pyle where she attended church and whether she had been “saved.” “Ms. Pyle was extremely uncomfortable with these questions,” the complaint for damages states. “In order to hopefully end these inquiries Ms. Pyle indicated that she did attend a church and that she was saved.”

But Hamilton kept going. He invited Pyle to his church and gave her directions, the lawsuit alleges. Later, it states, “Ms. Pyle was approached by someone who attended church with Trooper Hamilton who informed her that Trooper Hamilton had placed her on a prayer list.”

“Ms. Pyle believes that everyone has a First Amendment right to believe and worship as they wish,” the suit states. “However, she found it very intimidating to be blocked in by Trooper Hamilton while he asked her extremely personal and inappropriate questions.”

A suit was filed against Hamilton two years ago for doing the same thing.

In 2014, another driver, Ellen Bogan, filed suit after Hamilton gave her a warning ticket during a traffic stop — and a pamphlet for a church.

The material from the First Baptist Church in Cambridge City, Ind., referred to a radio broadcast, called “Policing for Jesus Ministries,” among other items.

“The pamphlet also outlines ‘God’s Plan of Salvation’ that requires the reader to acknowledge that she is a sinner and to realize that ‘Salvation is a gift and is received by faith in Jesus Christ’ and that ‘the Lord Jesus Christ paid the penalty for your sins,’” the 2014 complaint stated. “Ms. Bogan said thank you to the Trooper and the Trooper said ‘God Bless You,’ and returned to his car.”

On the plaintiffs’ side, both lawsuits were handled by the American Civil Liberties Union of Indiana. A settlement was eventually reached in the Bogan case, court records indicate.

Looks like former Atlanta Fire Chief Kelvin Cochran will soon have a speaking partner on his martyr tour.

UPDATE: JMG reader Bruce sends us the latest from the Indianapolis Star:

Indiana State Police on Thursday fired a trooper who has been accused of proselytizing citizens while on the job. Senior Trooper Brian Hamilton was a 14-year veteran of the agency. In a news release Thursday, the department said he was terminated after a two-month internal investigation into a complaint that he questioned a citizen’s religious affiliation in January.

“While all of us — citizen and police officer — enjoy the right to freedom of religion and freedom of speech, there are appropriate and proper restrictions placed on agents of the State related to their actions while engaged in their official duties,” State Police Superintendent Doug Carter said in a statement. “While I respect Mr. Hamilton’s religious views I am also charged to respect every citizen’s rights, and the best way forward for the citizens of Indiana, and for Mr. Hamilton, was to end his employment as a State Police officer.”