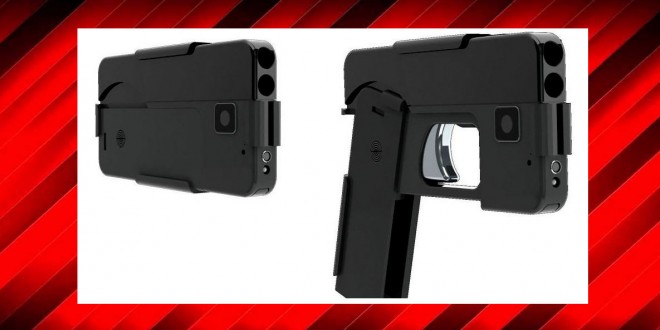 Sen. Chuck Schumer issued an urgent plea Monday for iGun Control ahead of the release of a new firearm that looks like a smartphone. The .380-caliber double-barrel handgun, manufactured by Ideal Conceal, is expected to hit the shelves in mid-2016 and will only cost $395, Schumer said. “At first glance or even second glance it looks like an iPhone,” Schumer said. “Take a closer look and you will see that it’s a real, deadly handgun.”

Schumer said that any deliberately disguised weapon is illegal under the National Firearms Act and called on the Department of Justice and Alcohol, Tobacco and Firearms to investigate the gunmaker. Thousands have already pre-ordered the gun. “It’s clearly being marketed for nefarious purposes — 4,000 people are ready to pull the trigger on this dangerous weapon,” Schumer said. “In its ad it says ‘smartphones are everywhere so this pistol will easily blend in in today’s environment,’” Schumer added. “This isn’t me saying this — it’s them!”

Carry with confidence, conceal in style. The best gun is always the one you have with you. In today’s day and age, carrying a concealed pistol has become a necessity. But what if you didn’t have to conceal?

That’s where Ideal Conceal comes in. Smartphones are EVERYWHERE, so your new pistol will easily blend in with today’s environment.

In its locked position it will be virtually undetectable because it hides in plain sight. No one wants to be in a dreadful situation that may require you to defend yourself with the use of deadly force. Yet as the old adage goes: “It’s better to have a gun and not need one, than to need a gun and not have one”.

With the newly created Ideal Conceal you can carry your pistol with you on any occasion. Of all the conceal and carry style handguns in the world, Ideal Conceal is in a league of its own!

The ground breaking Ideal Conceal is a carefully engineered double barreled .380 caliber people can safely carry in their purse or clipped to their side. Ingeniously designed to resemble a smartphone, yet with one click of the safety it opens and is ready to fire.

The product was designed with safety as a priority. A brand everyone can trust, a piece they can rely on, over and over.

Ammosexuals are complaining that the iGun only holds two bullets.