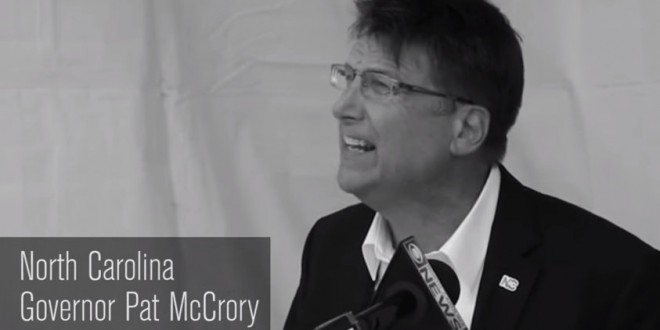 HRC Picks Apart The Many Lies Of Pat McCrory [VIDEO]

JMG reader Alan directs us to the below clip from the Human Rights Campaign which picks apart the many lies North Carolina Gov. Pat McCrory has spewed in the wake of national condemnation of his state’s hate bill. The clip notes that Politifact has given McCrory their “false” rating for his claim that HB2 doesn’t take away any existing rights. From their story:

“We have not taken away any rights that have currently existed in any city in North Carolina, from Raleigh to Durham to Chapel Hill to Charlotte,” McCrory said at a press conference Monday. “Every city and every corporation has the exact same discrimination policy this week as they had two weeks ago.”

We’re going to focus specifically on the claim about cities. When asked about it at that press conference Monday, McCrory said he was blindsided by the question and couldn’t answer it.

The reporter had asked, specifically, about the status of a housing discrimination ordinance in Greensboro and a policy in Raleigh that said any contractors who wanted to do business with the local government needed to have policies forbidding discrimination against gay or transgender people.

Carrboro also has a similar policy for contractors. A spokesman for the governor later said local housing ordinances wouldn’t be affected, citing a part of the bill that exempts “any private club or other establishment not, in fact, open to the public.”

But he had no answers about Carrboro and Raleigh on Monday. He didn’t respond to a follow-up email sent Wednesday. Another spokesman responded only to say he wasn’t the right person to ask. Perhaps that’s because the law does invalidate those ordinances.