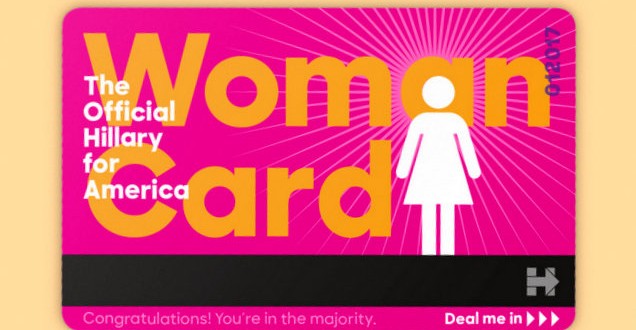 Shades of Beyonce selling her own boycott merchandise. The Hill reports:

Hillary Clinton’s presidential campaign is using comments GOP rival Donald Trump made earlier this week to raise money, asking supporters for donations in exchange for a “woman card.” After winning Republican contests Tuesday, Trump took aim at Clinton, saying she’s only doing well in the Democratic primaries because of her gender.

“Donald Trump has been saying ‘the woman’s card’ is all Hillary has going for her,” read a fundraising email from the Clinton campaign sent out Friday morning.

“We’ve been hearing from supporters all over the country that they’d like a “woman card” of their very own — to display proudly on a fridge or pull out of their wallet every time they run into someone who says women who support Hillary must not be using our brains.”