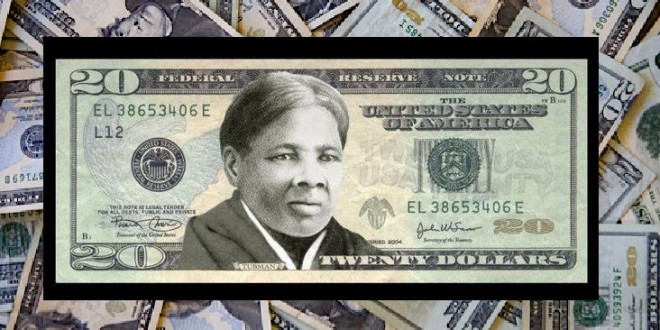 Politico has the scoop:

Treasury Secretary Jack Lew on Wednesday will announce a decision to keep Alexander Hamilton on the front of the $10 bill and put leaders of the movement to give women the right to vote on the back of the bill, sources tell POLITICO.

Treasury will also announce that it plans to replace former President Andrew Jackson on the $20 bill with Harriet Tubman, the sources said. There will also be changes to the $5 bill to depict civil rights era leaders.

Lew’s decision comes after he announced last summer that he was considering replacing Hamilton on the $10 bill with a woman. The announcement drew swift rebukes from fans of Hamilton, who helped create the Treasury Department and the modern American financial system.

NOTE: The image used for this post is speculative as the artwork for the bill has not yet been seen.

A brief Tubman bio for those not up on US history:

Harriet Tubman was an American bondwoman who escaped from slavery in the South to become a leading abolitionist before the American Civil War. She was born in Maryland in 1820, and successfully escaped in 1849. Yet she returned many times to rescue both family members and non-relatives from the plantation system. She led hundreds to freedom in the North as the most famous “conductor” on the Underground Railroad, an elaborate secret network of safe houses organized for that purpose.

Stand by for thunderous sadz from the Tea People. (Tipped by JMG reader TJ)