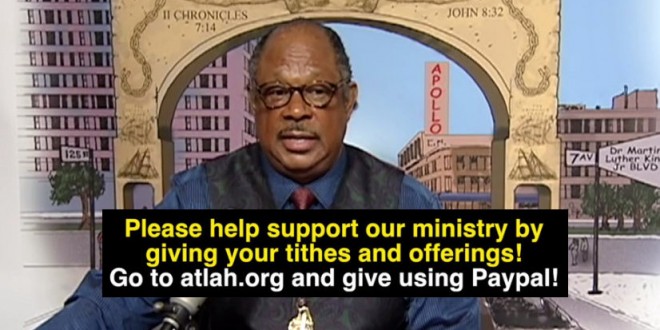 Harlem Hate Pastor: Stop The Vicious Sodomites At PayPal By Donating To My Church Via PayPal [VIDEO]

Yesterday Harlem hate Pastor James David Manning posted a clip in which he and his co-host denounced the “vicious sodomites” at PayPal for cancelling their new operations center in North Carolina over that state’s hate law. Manning, of course, makes no mention of the prominent PayPal donation banner that pops up during his rant.

That clip is here, but the one you should watch first is his below concession that he may lose his church to foreclosure later this month. As you may know, Manning has posted rants in which he declared that “men who are fags with testicles will be carrying babies in their testicles and giving birth to them through their anus” before his church is foreclosed.

Manning has closed YouTube comments on this clip, something I’ve not seen him do before.