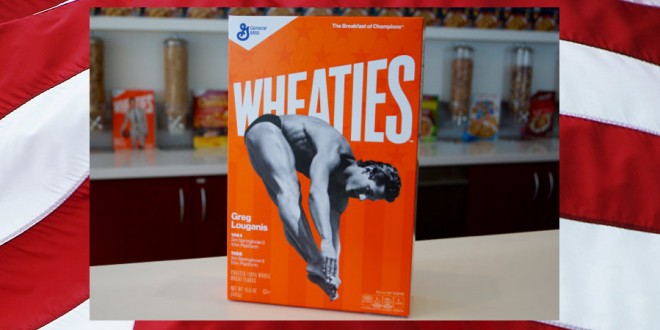 Due to his sexual orientation, Olympic diving legend Greg Louganis never landed the major endorsement deals bestowed on many world class athletes, but today he does finally get his Wheaties box. From the General Mills corporate blog:

They are three remarkable athletes who won multiple gold medals while competing against the world’s best. Their accomplishments certainly put them into consideration for the cover of a Wheaties box at the time, along with several outstanding world champion athletes who were selected by the brand team in their era. But today … there’s no time like the present for Janet Evans, Greg Louganis and Edwin Moses.

Wheaties has announced that they are the newest champions to be honored in the Wheaties Legends series. Evans is a four-time gold medal winner who broke seven world records. She’s considered the greatest female distance swimmer. Louganis also is a four-time gold medalist and is widely viewed as the greatest diver in the history of the sport. And, Moses won two gold medals and set a world record for the 400m hurdles in 1976. He also holds a world record for a decade-long streak of 122 victories.

“This is an opportunity for Wheaties to highlight past champions who haven’t yet received the honor of being on a Wheaties box for their past athletic achievements,” says Jenna Lynch, senior associate marketing manager for Wheaties. “Janet, Greg and Edwin are all world-class athletes both for the medals they won, and everything they accomplished during their careers.”

Louganis reacts: “It’s so iconic, everybody looks at the Wheaties box and it’s such an honor. I can’t wait to see Janet’s and Edwin’s boxes too. I’m excited for them as much as myself. What great company to be in. Edwin’s always been a hero to me. It’s such an honor to be in this group.”