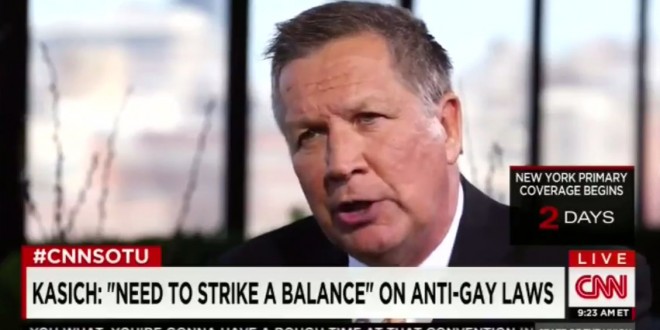 Gov. John Kasich On Anti-LGBT “Right To Discriminate” Laws: Gays Just Need To Get Over It [VIDEO]

This morning on CNN’s State of the Union, John Kasich was asked whether he would take steps to try to stop states from passing anti-LGBT “Right to Discriminate” laws. His blunt response? “No, I wouldn’t.” He added, “What I like to say is, just relax, if you don’t like what somebody is doing, pray for them. And if you feel as though somebody is doing something wrong against you, can you just for a second get over it?” Easy for Kasich to say. In his own state of Ohio, it’s still possible to be fired for being lesbian, gay, bisexual, or transgender.

“John Kasich can’t have it both ways. Either you’re for discrimination, or you’re against it. To tell LGBT victims of discrimination to ‘just relax’ and ‘get over it’ is disrespectful, outrageous, and not the kind of leadership expected from a credible presidential candidate. Kasich can continue trying to put a friendly face on his party’s discriminatory policies, but the fact remains that his own state remains a minefield for LGBT people who can still be fired for being who they are. As governor, Kasich has done nothing to help end discrimination against LGBT employees, and he was the final obstacle preventing marriage equality in Ohio before the Supreme Court’s decision. Trump and Cruz may make a lot of people look reasonable by comparison, but Kasich is no ‘moderate.’ He’s certainly no friend to the LGBT community.” – TJ Helmstetter, DNC spokesperson