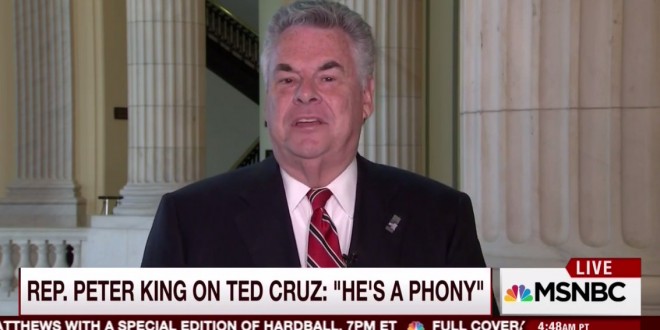 Just when it seems that Rep. Peter King must have exhausted his venom for Ted Cruz, he fires off another poisoned dart. “I hate Ted Cruz, and I think I’ll take cyanide if he ever got the nomination,” the New York Republican told MSNBC’s “Morning Joe” on Tuesday, as voters prepared to cast ballots in the state’s primary.

King wanted to make sure no viewers were confused by the jokes that the MSNBC hosts were making about his feelings regarding Cruz. He previously has said that New Yorkers mulling a vote for Cruz should have their heads examined. King’s ire for Cruz stems from the candidate’s opposition to a 9/11-related health care bill for police and firefighters and Cruz’s statement that New York values are socially liberal.

But the congressman didn’t stop with Cruz. He said frontrunner Donald Trump needs to show “he has some comprehension of what’s going on in the world” and that he’s “not just the guy at the end of the bar, throwing in remarks.”

Previous Democrats Cheer Transgender Rights Ruling: It’s Time For The GOP To Get Over Their Anti-LGBT Bias
Next Ride The Trump Train [VIDEO]