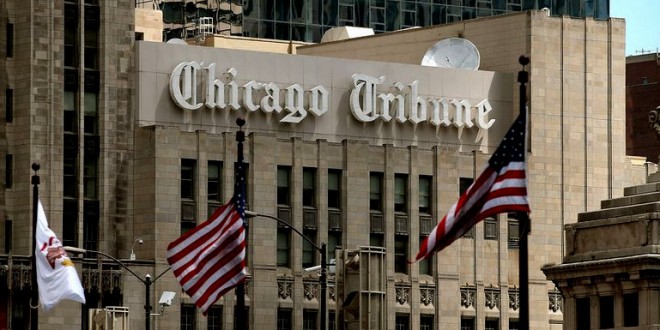 Gannett announced Monday an offer to buy Tribune Publishing, publisher of the Chicago Tribune, for $815 million, including the assumption of $390 million in debt. The unsolicited, all-cash offer, which translates to $12.25 a share, represents a 63 percent premium over Friday’s $7.52 a share closing price, as well as a premium over the $8.50 share price at which Tribune recently issued common shares, Gannett said. Gannett noted in a news release that the all-cash value of the transaction meant it could be completed quickly and in releasing a letter addressed to Tribune Publishing CEO Justin Dearborn, said it was “disappointed by the response” in a Friday letter from Dearborn regarding Gannett’s proposal.

Tribune Publishing shares skyrocketed more than 60% in premarket trading this morning after Gannett went public with its acquisition proposal. Tribune had privately rejected Gannett’s offer to buy the parent of major metro dailies including the Los Angeles Times, the Chicago Tribune, the Baltimore Sun, and the Hartford Courant. Tribune has “faced numerous challenges and leadership changes over the last few years,” Gannett CEO Robert Dickey says in a letter to Tribune’s CEO Justin Dearborn. “We believe Gannett is uniquely willing and able to propel Tribune into the position of strength that will allow its beloved and historic publications and other assets to survive and thrive in this challenging environment.”