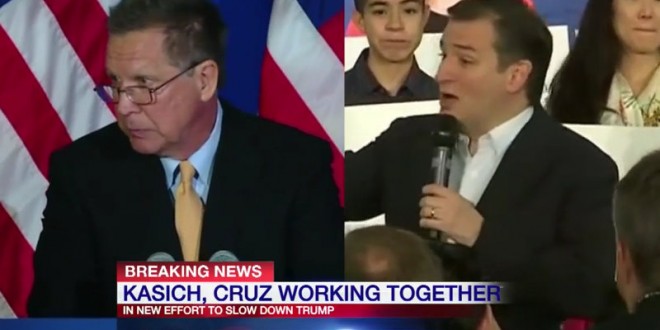 Ted Cruz and John Kasich are joining forces in a last-ditch effort to deny Donald Trump the Republican presidential nomination. Within minutes of each other, the pair issued statements late Sunday saying they will divide their efforts in upcoming contests with Cruz focusing on Indiana and Kasich devoting his efforts to Oregon and New Mexico.

The strategy — something the two campaigns have been working on for weeks — is aimed at blocking Trump from gaining the 1,237 delegates necessary to claim to GOP nomination this summer.

The extraordinary moves reflect the national strength Trump has shown and the inability of Republicans who oppose the New York billionaire to come together to stop him. Dividing up some of the remaining primary states by putting forward one strong alternative to Trump in each could be enough to take away delegates and curb Trump’s run to the nomination.

Wow, just announced that Lyin’ Ted and Kasich are going to collude in order to keep me from getting the Republican nomination. DESPERATION!

Lyin’ Ted and Kasich are mathematically dead and totally desperate. Their donors & special interest groups are not happy with them. Sad! — Donald J. Trump (@realDonaldTrump) April 25, 2016