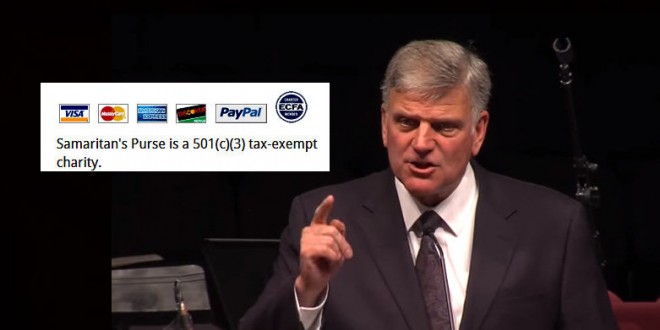 Franklin Graham: PayPal Gets The Hypocrite Of Year Award So Please Donate To Me Via My PayPal Button

“PayPal gets the hypocrite of the year award! This company says they’re not coming to North Carolina because the legislators and Gov. Pat McCrory have passed a law to protect women and children against sexual predators by not allowing men to use women’s restrooms and locker rooms.

“Congressman Robert Pittenger made a great point yesterday: ‘PayPal does business in 25 countries where homosexual behavior is illegal, including 5 countries where the penalty is death, yet they object to the North Carolina legislature overturning a misguided ordinance about letting men in to the women’s bathroom? Perhaps PayPal would like to try and clarify this seemingly very hypocritical position.’

“PayPal operates in countries including Saudi Arabia, Nigeria, and Yemen for Pete’s sake. Just last month PayPal announced they would be expanding in Cuba, a country in which homosexuals and transgender people have been imprisoned, tortured, and executed. PayPal only agreed to come to Charlotte in the first place after holding out for millions in corporate incentives. And under the current law that they are so strongly protesting, PayPal could have chosen their own corporate bathroom policies.” – Franklin Graham, who today is accepting PayPal donations on all his grifting sites. (Tipped by JMG reader Scott)