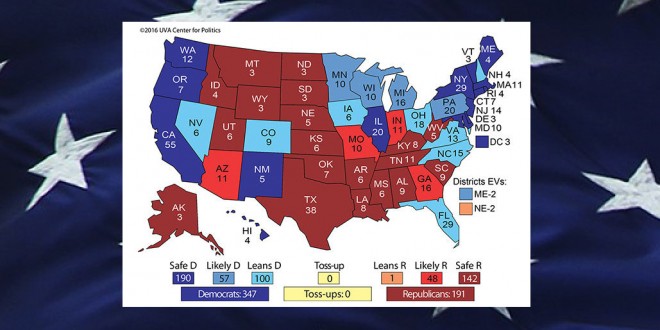 The University of Virginia Center For Politics has posted its “Crystal Ball” electoral college prediction on a Clinton vs Trump match-up, which shows Clinton winning the general election by a huge margin. The group acknowledges that their map is “ridiculously premature.” They write:

Yes, more than seven long months remain until the election, and all kinds of unexpected twists and turns can occur. Sure, we don’t know the shape of the economy or terrorism, or the precise job approval rating of President Obama in the autumn, or the gaffes and scandals that may yet unfold on our way to the ballot box. But goshdarnit, there’s finally a pause in the non-stop primary calendar, and we’re going to take advantage of that!

Our new map is one that will evolve, maybe substantially, after the conventions. Remember that independent and/or third-party candidates could change the calculus. Nonetheless, here is our extra-early, ridiculously premature projection of the Electoral College map in a possible Hillary Clinton-Donald Trump matchup. Yielding completely to boldness, or recklessness, we eliminated Toss-ups, and leaned all states to one or the other nominee. Each state’s electoral history, developing demographics, and current polling data guided our choices.

The Center For Politics claims a 98% accuracy record in predicting House and Senate races. In the 2012 presidential race, they correctly called 48 out of 50 states.