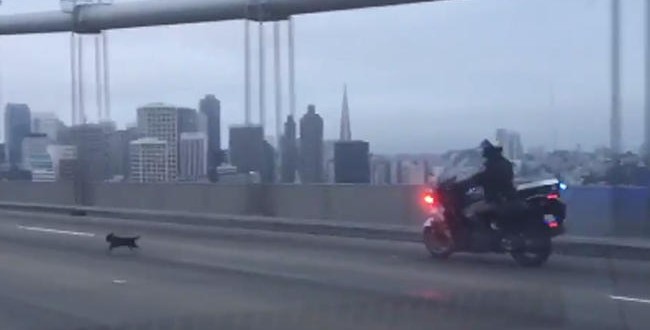 A Chihuahua is in animal custody after leading police on a chase across the Oakland-San Francisco Bay Bridge. The California Highway Patrol tweeted the small black dog “led us on quite a chase” Sunday and posted a video of it running furiously on the upper level of the bridge while being trailed by a motorcycle officer. After it was captured, the Chihuahua was taken to a San Francisco animal shelter where staff members named it Ponch, after the CHP Officer Frank Poncherello played by Erik Estrada in the TV series “CHiPs.”

Ponch is doing well this morning @CHPSanFrancisco @ErikEstrada but he would love to see his family. #BayBridgeDog pic.twitter.com/t8rGQosHfK
— SF Animal Care (@SFACC) April 4, 2016

Missing a chihuahua? Little guy led us on quite a chase this morning on the Bay Bridge. Pls contact if he’s yours pic.twitter.com/sy1tGYJOuO