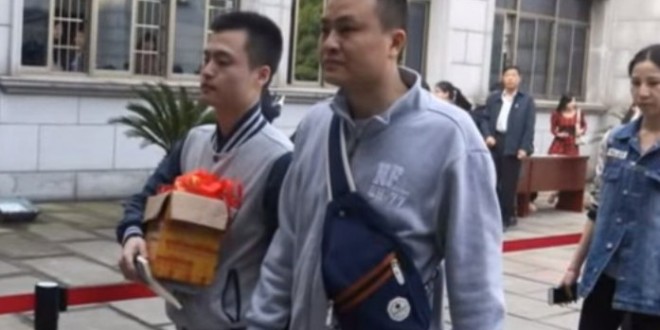 A Chinese judge has rejected a gay couple’s attempt to secure the right to marry in the country’s first same-sex marriage case. Sun Wenlin, 27, from the central province of Hunan, had sued the civil affairs bureau in the city of Changsha for the right to marry his 37-year-old partner Hu Mingliang, a security guard.

Sun decided to take legal action after authorities refused the couple’s request to have their relationship officially recognised as a marriage last June, on their first anniversary together. In January a court in Changsha agreed to hear their case, which activists said was the first of its kind in China.

At lunchtime on Wednesday a judge in Changsha announced he was dismissing the case shortly after the three-hour trial hearing had ended. Speaking to the Guardian after the unexpectedly quick verdict, Sun said he believed the court had not taken enough time to consider their case and had been “too cautious”.

John Shen, a prominent gay rights activist, said he was optimistic about the future for China’s LGBT community, pointing to legal cases in which Chinese citizens had sought to safeguard their rights.

“Even though the case was rejected by the court I still think it is a big step since it has already raised huge attention and discussion, which was the case’s original goal,” said Shen, who is programme manager at the Beijing LGBT Centre, China’s oldest and largest advocacy group. “It is a monument on the way to victory.”

Same-sex marriage has not yet been legalized by any Asian nation.