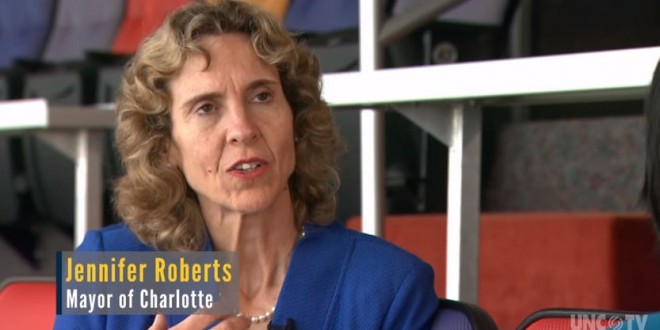 Charlotte shouldn’t be punished for an ordinance that was ultimately overturned by legislation preventing local and state governments from mandating protections for LGBT people, Mayor Jennifer Roberts said Thursday at a town hall meeting designed to rally support for the repeal of the controversial measure.

The town hall, which drew about 200 people to a Charlotte hotel, was the first in a series of meetings leading up to a protest at the General Assembly when it convenes April 25 in Raleigh.

Roberts told the group that Charlotte is committed to being a welcoming community to all people — even those who disagree with the original ordinance — and will continue to stress the values of inclusion and equality.

Her comments coincided with a campaign designed to attract people to the city despite passage of the legislation that had led companies to withdraw commitments to the city and state and moved Bruce Springsteen and Ringo Starr to cancel upcoming concerts. In keeping with the theme of the city’s new campaign, Roberts showed off a white T-shirt with the words “Always Welcome Charlotte” on the front.