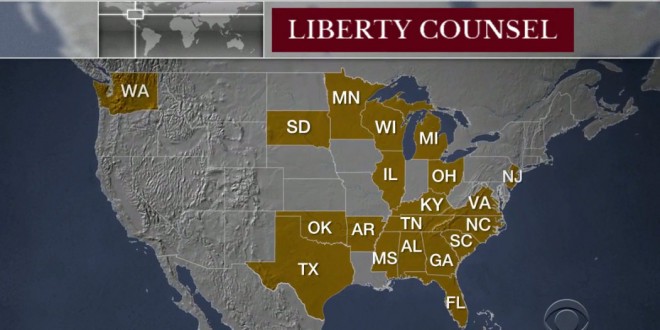 Lawmakers in state after state are passing bills to protect those who cite religious beliefs for refusing to serve or employ gay or transgender people. CBS News wondered why so many of these laws — including some that limit access to public restrooms — are surfacing now … and who’s behind all of this? We went and found out.

Demonstrators against the so-called bathroom bills were out in force in South Carolina — their chants echoing those in other states where they say legislatures have have enacted laws enabling bigotry.

But while they protested, the conservative group, that’s helped author many of those measures protecting religion over sexual orientation, was working at its Orlando area office on new ways to uphold what it says is really at stake.

“It is only about being free to pursue your faith,” said Mathew Staver. “We have no interest in discriminating against anyone.” Where are they going with this?

“The Supreme Court in the 5-4 opinion on marriage in 2015 lit the house on fire,” Staver said. “All we’re trying to do is control the fire at this point in time.” And he is unfazed by corporate threats to pull out of states in protest against his work. “They’re not gonna follow through,” Staver said. So it’s a bluff? “It’s a bluff. They’re not leaving,” he said.

As we know, Alliance Defending Freedom is also providing support in many states.