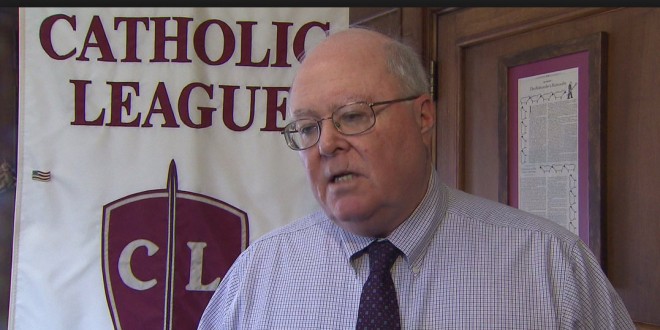 Catholic League blowhard Bill Donohue today took a break from a streak of more than a dozen posts calling for boycotts of various ABC/Disney advertisers to express surprise that there’s such a thing as a gay dodgeball league, as was depicted on last night’s episode of The Real O’Neals. He writes:

It makes no more sense to be proud of one’s sexual orientation than it does to gloat over being left-handed. If a status is ascribed, there is no cause for acclaim (if the status is achieved, that is different, but that is not what gays tell us). No matter, in our gay-friendly TV world, gay pride is all the rage, and on last night’s episode of “The Real O’Neals” the cast got ecstatic over a gay pride flag, posted in a Catholic school.

When they wrote this episode, one can almost hear executive producer Dan Savage snickering in delight over how this scene will horrify most Catholics. Sorry to disappoint, Danny boy, but such Hollywood fare is so mundane that it instills a yawn, not outrage. The storyline of last night’s show was vintage homosexual. “He’s queer.” Yes, we knew that about poor Kenny. “What’s the gay version of boobs?” We’re happy to report that Kenny never replied. We’ve long known there are coffee shops that cater to gays, but it came as a surprise to learn that there is such a thing as gay dodgeball. Never heard about that until last night. But it sure beats watching gay wrestling.