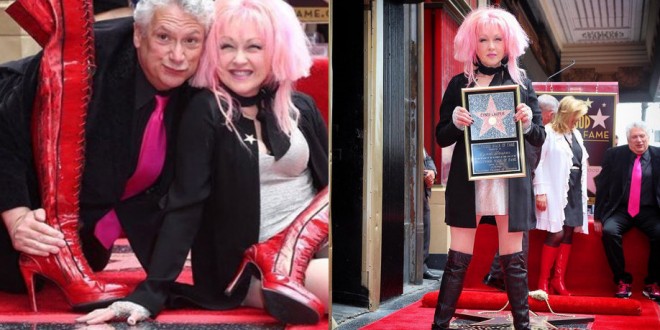 It’s hard to imagine a more simpatico creative pairing than Cyndi Lauper and Harvey Fierstein. Lauper, the award-winning (Grammy, Emmy and Tony) pop icon whose rainbow-colored hair and anthemic “Girls Just Wanna Have Fun” single made her a hero among fiery female teens in the 1980s, has long established herself as a staunch humanitarian and leading advocate for LGBT rights. Fierstein, the gravel-voiced actor-cum-playwright who rose to fame with such landmark Tony award-winning triumphs as “Torch Song Trilogy” and “La Cage aux Folles,” is a preeminent human-rights activist who was openly gay at a time when almost nobody in the entertainment industry was.

Decades later, the two artists and longtime friends finally came together to write and score the 2013 Tony Award-winning musical “Kinky Boots,” an achievement for which on April 11 they will receive adjacent stars — hers for recording; his for live theater — on the Hollywood Walk of Fame in a plum spot located in front of the Pantages Theater where “Kinky Boots” is gearing up for its April 13-24 Los Angeles rerun. “I’d wanted to work with Harvey for a really long time and when this opportunity came up I was very excited to take it,” says Lauper of her inaugural foray into Broadway musicals. “Harvey kind of protected me and walked me through the experience. Basically, he was my mother.”