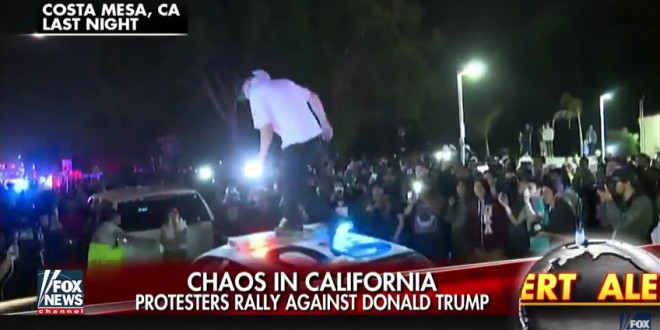 Hundreds of demonstrators filled the street outside the Orange County amphitheater where Donald Trump held a rally Thursday night, stomping on cars, hurling rocks at motorists and forcefully declaring their opposition to the Republican presidential candidate. Traffic came to a halt as a boisterous crowd walked in the roadway, some waving American and Mexican flags. Protesters smashed a window on at least one police cruiser, punctured the tires of a police sport utility vehicle, and at one point tried to flip a police car.

Video footage showed some anti-Trump demonstrators hurling debris at a passing pickup. One group of protesters carried benches and blocked the entrance to the 55 Freeway along Newport Boulevard, with some tossing rocks at motorists near the on-ramp. By 10:15 p.m., the bedlam had largely subsided and Lt. Mark Stichter of the Orange County sheriff’s department said no major injuries were reported. Costa Mesa police confirmed that a total of 17 people — 10 males and 7 females — were arrested on suspicion of unlawful assembly. Details on the ages and names of those arrested were not released.