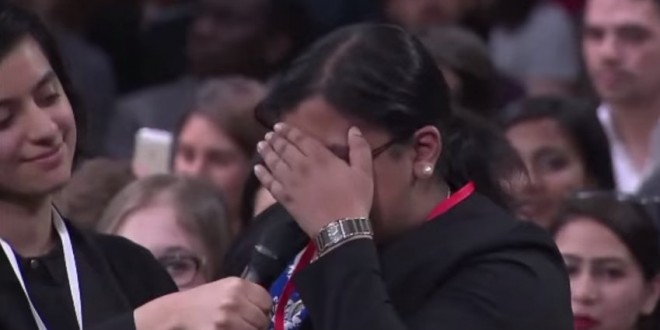 During an appearance today in London, President Obama encouraged an emotional transgender student, saying that he is “incredibly proud” of her work for social reform, but that it’s not possible to overturn laws like North Carolina’s with the current Congress. From the Daily Mail:

Maria Munir, a University of York student who is running for a council seat in Watford, came out as a non-binary person while asking a question, imploring the President to do more for transgender rights, particularly gender neutral toilets.

The student said: “I’m coming out to you as a non-binary person, I don’t fit – I’m getting emotional – (there was applause from the crowd) because I come from a Pakistani Muslim background which has cultural implications. I know that in North Carolina people are being forced to produce birth certificates to prove your gender to go to the toilet.”

“We don’t recognise non-binary people under the UK Equality Act so if I am discriminated against I have no rights. I’ve been working for the last nine months to raise these issues even though I’m still at university and running for local elections at Watford. I wanted to ask if you and David Cameron would take us seriously as transgender people and tell us how to go beyond what has become accepted in including people who are outside the social norms.”

Obama said, “We’re taking a lot of serious steps to address these issues within the federal government. The challenge we’ve had is – North Carolina, that’s a state law – and because of our system of government, I can’t overturn on my own state laws unless a federal law is passed that prohibits states from doing these things. And with the Congress I currently have that’s not likely to happen. But we’re doing a lot of work administratively and, as I said, you should feel encouraged that social attitudes on this have changed faster than I’ve seen on any other issue.”

Obama went on to say that while change may not feel fast enough, activists should keep pushing and that things are moving in the right direction because of “courageous” people like the student.