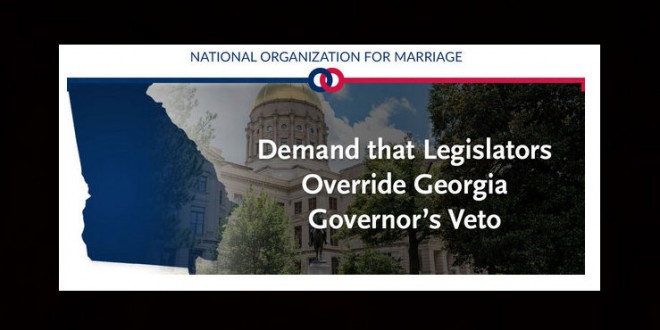 Dear Marriage Supporter, As you know, Georgia Governor Nathan Deal has become the latest example of a cowardly Republican who has thrown people of faith to the wolves by vetoing extremely modest religious liberty legislation (HB 757) that would have protected pastors, churches and religious groups from having to participate in same-sex ‘weddings’ or host them in their facilities. Deal’s action makes it open season on Christians, churches and other people of faith who do not want to be personally forced to be a part of a same-sex ceremony that they oppose on religious grounds.

I need to you act immediately to urge legislators to override turncoat Nathan Deal’s veto of this important legislation. Deal kowtowed to wealthy corporate interests who had already severely watered down the legislation by removing most of the needed protections, and then he showed himself to be a corporate lackey when billionaire sports owners and big business chieftains demanded that he veto even this modest protection for pastors, churches and religious groups.

What hypocrisy! Billionaire sports owners and corporate CEOs can spend whatever they want fending off demands by LGBT extremists, but pastors and churches can’t. That is why they need the protection of the law that Nathan Deal vetoed. Without this law, they will be subject to all kinds of legal maneuvers and pressure designed to force them to perform gay ‘weddings’ and make their facilities available for something that many consider to be sinful.

Fortunately, the Georgia General Assembly has the ability to bring itself into special session to override Governor Deal’s disgusting veto of this important religious liberty law. Please sign this petition calling on legislators to go into special session for the purpose of overriding Nathan Deal’s veto of HB 757.

Last year, the North Carolina General Assembly overrode a Republican governor’s veto of legislation that protected people of faith from having to perform a same-sex ‘wedding’ against their religious beliefs. Now it’s up to lawmakers in Georgia to take a similar step to protect pastors, churches and religious groups from having to perform gay ‘weddings’ in that state.

It doesn’t matter if you live in Georgia or not. The ACLU and other leftists are whipping up their allies in Hollywood and San Francisco to create a firestorm of protest in Georgia, and we need to counter that with a strong showing from people of faith all across the country.

Please act today to demand that Georgia legislators support Christians and all people of faith by going into special session to override Governor Nathan Deal’s tragic and incredibly misguided veto of HB 757.

Thank you for acting today to support pastors, churches and religious groups who wish to stand for God’s understanding of marriage and who refuse to be pressured into being personally involved in that which is against God’s commands.

A special session is extremely unlikely. Even the hate bill’s chief sponsor, crackpot state Sen. Josh McKoon, appears resigned to bringing the bill back up next year.