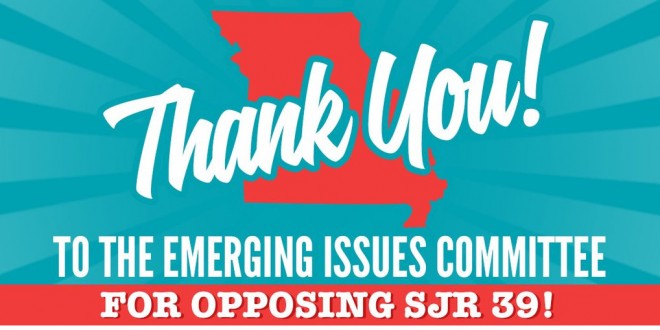 Via press release from PROMO Missouri:

SJR 39 has had national attention in light of the news of anti-LGBT bills in North Carolina and Mississippi passing. This pressure, as well as pressure from businesses across Missouri, put SJR 39 under a microscope in Jefferson City. Thousands of emails in opposition to SJR 39 were sent to committee members, and over 4,200 petitions opposing SJR 39 were delivered to the Speaker of the House.

The committee held a public testimony in an over-capacity room on April 12. The hearing lasted over four hours and nearly one-fourth of those there were able to speak. Businesses and organizations that provided testimony in opposition included Kansas City Chamber of Commerce, Kansas City Sporting Commission, St. Louis Sporting Commission, Monsanto, St. Louis Regional Chamber, and Visit KC. Overwhelmingly, businesses expressed concern that SJR 39 would have a negative impact on the economy.

We are grateful to the Emerging Issues committee for searching their hearts, listening to both sides of this issue, and doing the right thing today by opposing SJR 39.

“We thank the House committee for listening to the overwhelming chorus of fair-minded Missourians, business leaders, and civil rights advocates who demanded they oppose this radical legislation that threatens severe harm to the entire state,” said JoDee Winterhof, HRC Senior Vice President for Policy & Political Affairs.“However, even with this vote today, we must remain diligent to ensure this discriminatory legislation does not move in any other way during the final two weeks of the legislative session.”

The opposition to SJR 39 was overwhelming. More than 60 leading CEOs and business executives signed onto an open letter urging lawmakers to stop the proposal that would have extreme negative consequences for Missouri’s economy, and numerous companies including Dow Chemical Company and Monsanto spoke out. In addition, SJR 39 has received widespread condemnation from fair-minded Missourians and civic leaders throughout the state, including Governor Jay Nixon, the St. Louis Post Dispatch, the St. Louis Regional Chamber. The St. Louis Regional Chamber said the proposal is “counter to MO values & will have negative economic consequences.” Both Democratic presidential candidates Hillary Clinton and Bernie Sanders also spoke out against the resolution.

Missourians, thank you for all of heartfelt stories to your legislators. It worked. #SJR39fails #moleg