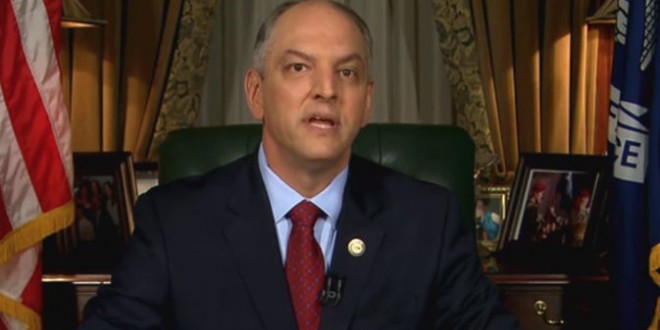 Similar executive orders were signed by former Governors Edwin Edwards and Kathleen Blanco and are in place around the country. There is currently no state law protecting lesbian, gay, bisexual, or transgender (LGBT) Louisianans from employment discrimination.

“We are fortunate enough to live in a state that is rich with diversity, and we are built on a foundation of unity and fairness for all of our citizens,” said Gov. Edwards. “We respect our fellow citizens for their beliefs, but we do not discriminate based on our disagreements. I believe in giving every Louisianan the opportunity to be successful and to thrive in our state. Our goal is to promote the opportunities we have right here in Louisiana. While this executive order respects the religious beliefs of our people, it also signals to the rest of the country that discrimination is not a Louisiana value, but rather, that Louisiana is a state that is respective and inclusive of everyone around us.”

Gov. Edwards stood with the business community and LGBT citizens in opposition to former Governor Bobby Jindal’s executive order extending provisions included in Mike Johnson’s Marriage and Conscience Act rejected by the House Committee on Civil Law and Procedure during last year’s regular legislative session. Many in the legislature and the business community felt Governor Jindal’s executive order was not only unnecessary, but bad for business, tourism, and the Louisiana economy.

“The previous administration’s executive I am rescinding was meant to serve a narrow political agenda, “said Gov. Edwards. “It does nothing but divide our state and forced the business community, from Louisiana’s smallest businesses to large corporations, like IBM, to strongly oppose it. This executive order threatens Louisiana’s business growth, and it goes against everything we stand for– unity, acceptance, and opportunity for all.”

Jindal’s order came in May 2015 after having been rejected by the state legislature that very same day.