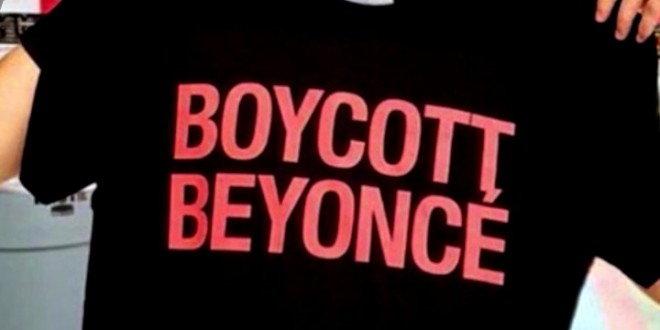 Beyonce Flips Off Haters, Sells Own Boycott Merch, Breitbart Calls It “Slap In The Face Of Law Enforcement”

Beyoncé is selling t-shirts and phone cases that say “BOYCOTT BEYONCÉ” at her current tour, which kicked off last night in Miami. The slogan’s swiped from calls by some law-enforcement organizations to shun her after her “Formation” video and Super Bowl performance. Now, for $45, you can confuse all who encounter you as to whether you’re a cop or a Beyoncé fan with a sense of irony, or both. The Blaze’s TV commentator Tomi Lahren recently said she declined the pop star’s request to take 30 seconds of Lahren’s on-air rant about Beyoncé’s Super Bowl show and use it on the Formation tour. Selling pro-boycott merchandise is the same idea—call it, well, turning lemons into Lemonade.

Breitbart is ever so pissed:

The pop star’s decision to sell “Boycott Beyoncé” merchandise, including T-shirts, cellphone cases, and hats, is Beyoncé’s latest slap in the face of law enforcement. To be clear, the anti-police imagery in Beyoncé’s Super Bowl performance and music video for “Formation” is overt.

Beyoncé is seen sitting on a sinking police car. Another scene shows a graffitied wall with the words “Stop Shooting Us,” while other images show police officers raising their hands in the air, à la Michael Brown, who did not have his “hands up” when Officer Wilson fired on him. What’s more, Beyoncé move to mock the police boycott against her comes just days after the release of her latest album, Lemonade, which also pays tribute to Black Lives Matter.

In a true boss move, Beyoncé is selling “Boycott Beyoncé” merch on her tour: https://t.co/n4nrkkMXdT pic.twitter.com/O3IJZCEfjA