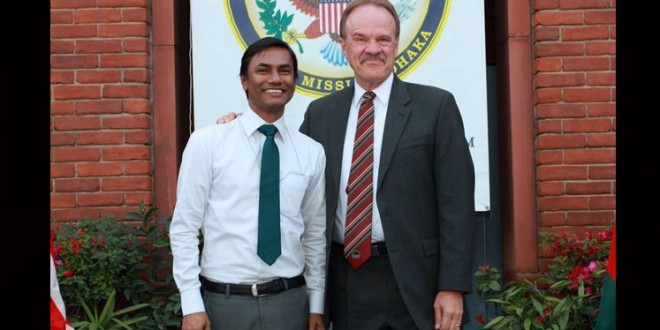 An al-Qaeda affiliate has claimed the murder of a prominent gay rights activist who was hacked to death in Dhaka by men armed with guns and machetes who entered his flat pretending to be parcel couriers.

Xulhaz Mannan, along with his friend Mahbub Tony, also an activist, died on the spot from cuts to their heads, according to police. A security guard who was also attacked was rushed to hospital.

A Twitter handle that identified itself as an outlet of Ansar Al Islam said its fighters had killed the two men, calling them “the pioneers of practicing (sic) and promoting homosexuality in Bangladesh”. The group has made similar claims about the deaths of other liberal activists in Bangladesh.

Mr Mannan, who worked at the US government donor agency USAID and was previously employed as a protocol officer at the US embassy in Dhaka, was one of the founding editors of Roopbaan, the country’s first LBGT magazine. Mr Tony worked as an actor.

Mannan was one of the main organizers of a gay pride event which was banned by police this year.

US Ambassador Marcia Bernicat has urged Bangladesh government in the “strongest terms” to apprehend the criminals behind the murder of her colleague Xulhaz Mannan. Unknown assailants hacked to death to Xulhaz along with another inside a house in capital Dhaka’s Kalabagan on Monday. Xulhaz was an employee of the US mission in Dhaka. “We abhor this senseless act of violence,” the ambassador said in a statement.

“I am devastated by the brutal murder of Xulhaz Mannan and another young Bangladeshi this evening in Dhaka,” she said. “Xulhaz was more than a colleague to those of us fortunate to work with him at the US Embassy. He was a dear friend,” she said. “Our prayers are with Xulhaz, the other victim, and those injured in the attack.”

Previous OPEN THREAD: Today’s Acela Primary
Next Dr. Stabby: Harriet Tubman Would Turn Over In Her Grave Over Being Made The Face Of Debt Slavery