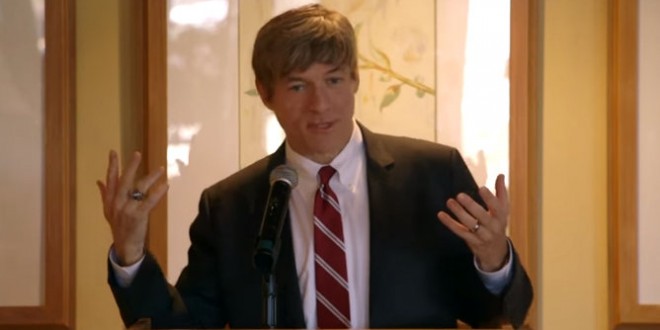 Thanks in part to pressure from virulently anti-gay and comically bewigged Catholic activist Michael Voris, last week the Catholic Church fired its news service editor for tweeting against North Carolina’s hate law. Yesterday Voris posted a video on his website, Church Militant, in which he confesses that for most his thirties, he lived a sexually sinful life of “live-in relationships with homosexual men.” Voris claims that he makes this revelation because the New York Archdiocese has been plotting to out him over his past. From the transcript for the video:

As you probably know, the apostolate has been somewhat silent this week publicly. That’s because a situation has developed that I must fill you in on. It involves the sins of my past life all committed prior to my reversion to the Catholic faith. We have on very good authority from various sources that the New York archdiocese is collecting and preparing to quietly filter out details of my past life with the aim of publicly discrediting me, this apostolate and the work here.

I have never made a secret that my life prior to my reversion was extremely sinful. I have said many times — in public — that I was in a state of mortal sin, and had I died, I would have been damned. I also revealed these sins were of a sexual nature and that they occurred over a prolonged period of time. I did not reveal the specific nature or details of the sins, because when I returned home to the Church, I did not think that a full public confession of details was necessary in order to start proclaiming the great mercy of God. Perhaps that was a wrong assessment. I don’t seriously know. Perhaps along these years I should have been revealing of greater detail. That, I now think so, but more on that in a moment.

Whatever the matter, I will now reveal that for most of my years in my thirties, confused about my own sexuality, I lived a life of live-in relationships with homosexual men. From the outside, I lived the lifestyle and contributed to scandal in addition to the sexual sins. On the inside, I was deeply conflicted about all of it. In a large portion of my twenties, I also had frequent sexual liaisons with both adult men and adult women. These are the sins of my past life in this area which are all now publicly admitted and owned by me. That was before my reversion to the Faith.

I had great pain to overcome from childhood and my youth and instead of recommending myself to God in my youth, I gave in to the flesh and died spiritually. I shudder every time I think what would now be my lot had I died in a traffic accident or something. I gave up myself — my masculinity, my identity, my self-understanding, my own dignity as a baptized Catholic. As I have said publicly, without the details, I lived a horrible life and would be in Hell had I been killed before returning to the Faith.

The New York Archdiocese denies that they were planning to out Voris: “It is absolutely, 100 per cent untrue that the archdiocese was collecting and preparing to release anything concerning him personally or his website.”

Back in 2010 I posted several times about Voris, his attacks on President Obama, on LGBT rights, and his call for a “benevolent Catholic dictatorship in the United States.”  These posts prompted a JMG reader to write and tell me that he’d once been close friends with Voris, who, according to the reader, had been a producer at the CBS affiliate in Detroit.

The reader further shared that he, Voris, and Voris’ boyfriend at the time had attended International Mister Leather some time in the 90s. According to the reader, Voris had to lend him a leather item in order to comply with that weekend’s dress code at Chicago’s Manhole bar.

From the reader’s email: “It really pains me to see Mike spitting this vitriol into the public, and it also pains me to see a guy who was once a deep and close friend be the subject of ridicule and derision. But I also recognize that he’s brought this upon himself. Until he can face his own demons, he’ll only be able to demonize that which scares him.”

During my 2010 exchange of emails with the above-quoted JMG reader, he asked that he not be named should I report on his account of Voris’ past. As I was unable to independently confirm that Voris had, as Voris himself now puts it, once lived a sexually sinful life, I decided against outing him based on an anonymous claim. That issue, obviously, is now moot. At this writing, nearly 1400 Church Militant commenters have effusively praised Voris for his revelation.

VIDEO: In June 2015 I reported that World Net Daily had praised Voris for “infiltrating” the Satanic Temple’s unveiling of a statue in Detroit. His site Church Militant wrote that day:

Before the unveiling, the announcer denounced the protestors who had shown up outside the original venue — in addition to ChurchMilitant.com’s presence and our conspicuous six-foot-tall statue of St. Michael secured to a flatbed truck, two women were also present holding up a large banner with an image of the Blessed Virgin Mary. At 11 p.m., two men in leather S&M attire grabbed each side of the sheet and yanked it off, to loud applause and shouting. The men then stood directly in front of the monument and began kissing lewdly while the crowd cheered, and afterwards a steady stream of VIP ticketholders — who had paid $75 for the chance to approach the statue — took turns sitting on Baphomet’s lap while engaging in sexual groping, mostly homosexual in nature. Outside, ChurchMilitant.com staff drove the St. Michael statue around the venue three times while reciting the St. Michael prayer.