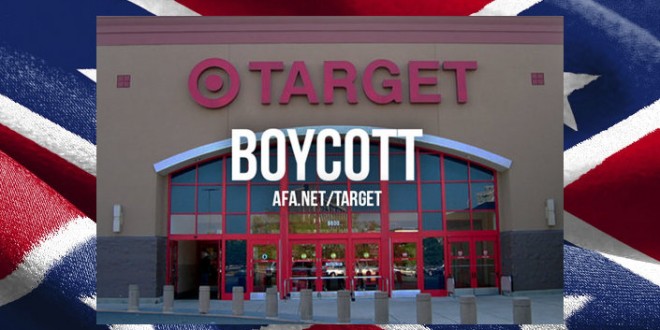 This WAS expected. Via press release:

The American Family Association is calling for a boycott of Target after the retail giant said it would allow men to use the women’s restrooms and dressing rooms in their stores.

On its web site this week, Target announced, “[W]e welcome transgender team members and guests to use the restroom or fitting room facility that corresponds with their gender identity. …Everyone deserves to feel like they belong.”

This means a man can simply say he “feels like a woman today” and enter the women’s restroom…even if young girls or women are already in there.

Target’s policy is exactly how sexual predators get access to their victims. And with Target publicly boasting that men can enter women’s bathrooms, where do you think predators are going to go?

Clearly, Target’s dangerous new policy poses a danger to wives and daughters. We think many customers will agree. And we think the average Target customer is willing to pledge to boycott Target stores until it makes protecting women and children a priority.

One solution is a common-sense approach and a reasonable solution to the issue of transgendered customers: a unisex bathroom. Target should keep separate facilities for men and women, but for the trans community and for those who simply like using the bathroom alone, a single occupancy unisex bathroom option should be provided.

Take Action: Sign the pledge to boycott Target now! Target should not allow men to enter the women’s restrooms and dressing rooms. After you sign the pledge, contact Target and let them know you’ve signed the Pledge. Call Target Guest Relations at 1-800-440-0680. Share your concerns on their Facebook page at https://www.facebook.com/target. When sharing this on social media use #BoycottTarget. Please share this email with family, friends and Sunday School members.

REMINDER: When powerful national Christian groups with millions of members call for boycotts, that is a righteous use of the free market in order to preserve morality, marriage, family, and the American way. But when pro-LGBT folks call for a boycott, THAT is homofascist intimidation, intolerance, bullying, economic terrorism, a stifling of religious liberty, and an attempt to deny the freedom of speech. And don’t you forget it.