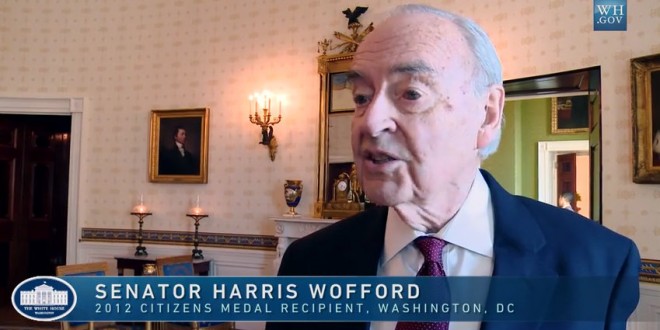 90 Year-Old Former US Sen. Harris Wofford Reveals That He’s About To Marry A 40 Year-Old Man

At 90-years-old, a former U.S. senator has found love with a man — 20 years after the death of his wife. Harris Wofford, a Democrat who represented Pennsylvania in the U.S. Senate from 1991-1995, wrote in a column for The New York Times that he is set to marry a man this Saturday.

Wofford retells the story of how he and his wife met, and how then-President Bill Clinton phoned him as his wife, Clare, died of cancer. They had been married for 48 years. Wofford, who says he was convinced he would never find love again, met Matthew Charlton, his husband-to-be, while visiting Florida 15 years ago.

It was afternoon, and the tanning beachgoers faced west, toward the wall of concrete buildings lining the boulevard, to catch the sun, ignoring the beautiful sea. I swam alone in the water, attracting the attention of two bystanders near the shore. They came over to say hello, which is how I met Matthew Charlton.

As we talked, I was struck by Matthew’s inquisitive and thoughtful manner and his charm. I knew he was somebody I would enjoy getting to know. We were decades apart in age with far different professional interests, yet we clicked.

I admired Matthew’s adventurous 25-year-old spirit. When he told me that I was “young at heart,” I liked the idea, until I saw a picture of him on a snowboard upside down executing a daring back flip. The Jackson Hole newspaper carried the caption, “Charlton landed the jump without mishap.”

We took trips around the country and later to Europe together, becoming great friends. We both felt the immediate spark, and as time went on, we realized that our bond had grown into love. Other than with Clare, I had never felt love blossom this way before.

It was three years before I got the nerve to tell my sons and daughter about Matthew. I brought a scrapbook of photographs, showing Matthew and me on our travels, to a large family wedding. It was not the direct discussion the subject deserved. Yet over time my children have welcomed Matthew as a member of the family, while Matthew’s parents have accepted me warmly.