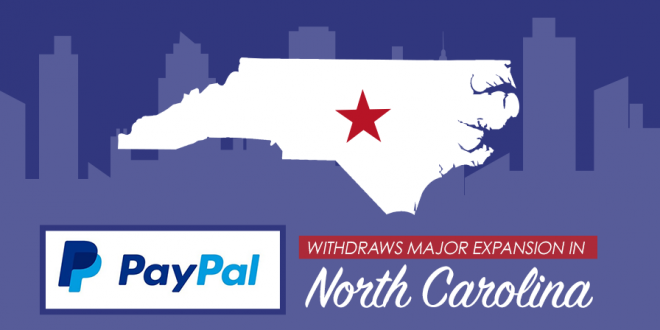 Freedom For All Americans reports:

This morning, April 5, Paypal, a global company dedicated to facilitating online payments, announced that it is withdrawing plans to open a new global operations center in Charlotte. The reason for their plans to withdraw? North Carolina’s House Bill 2, which was ramrodded through the North Carolina General Assembly on March 23, with just 12 hours from introduction to Governor Pat McCrory’s signature. The law knocks down municipalities’ ability to enact local ordinances protecting LGBT North Carolinians from discrimination and then codifies anti-transgender policies into state law and has seen enormous blowback over the past few weeks.

From the PayPal announcement:

Two weeks ago, PayPal announced plans to open a new global operations center in Charlotte and employ over 400 people in skilled jobs. In the short time since then, legislation has been abruptly enacted by the State of North Carolina that invalidates protections of the rights of lesbian, gay, bisexual, and transgender citizens and denies these members of our community equal rights under the law.

The new law perpetuates discrimination and it violates the values and principles that are at the core of PayPal’s mission and culture. As a result, PayPal will not move forward with our planned expansion into Charlotte.

This decision reflects PayPal’s deepest values and our strong belief that every person has the right to be treated equally, and with dignity and respect. These principles of fairness, inclusion and equality are at the heart of everything we seek to achieve and stand for as a company. And they compel us to take action to oppose discrimination.

Our decision is a clear and unambiguous one. But we do regret that we will not have the opportunity to be a part of the Charlotte community and to count as colleagues the skilled and talented people of the region. As a company that is committed to the principle that everyone deserves to live without fear of discrimination simply for being who they are, becoming an employer in North Carolina, where members of our teams will not have equal rights under the law, is simply untenable.

While we will seek an alternative location for our operations center, we remain committed to working with the LGBT community in North Carolina to overturn this discriminatory legislation, alongside all those who are committed to equality.

We will stand firm in our commitment to equality and inclusion and our conviction that we can make a difference by living and acting on our values. It’s the right thing to do for our employees, our customers, and our communities. – Dan Schulman, President and CEO, PayPal

Previous BarbWire: Yes, Melania Trump Is A “Slut”
Next Greg Louganis Finally Gets His Wheaties Box