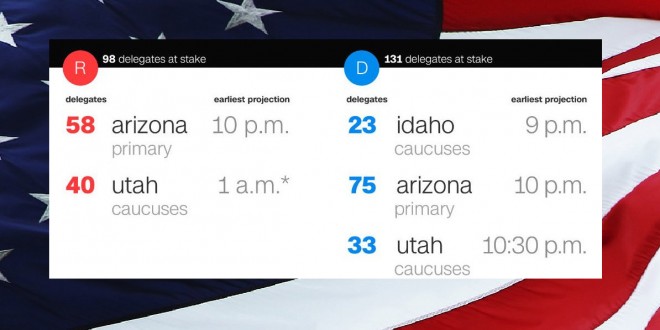 Bernie Sanders is expected to do better today than he did last Tuesday, when Hillary Clinton took all of that day’s states, albeit not always by much of a margin. Via Politico:

The primary calendar is suddenly looking better for Bernie Sanders. Two of the three states voting Tuesday are in his wheelhouse — Idaho and Utah, both largely white states holding caucuses. Then, on Saturday, come three more Western caucus states where the Vermont senator could run the table. A successful run of five wins over the next five days won’t solve Sanders’ delegate math problem, but it would serve to prime his powerhouse small-donor fundraising machine and enable him to justify continuing his long-shot campaign deep into the primary calendar — perhaps even through June.

Arizona will be the toughest state today for Sanders as the closed primary there locks out independent voters.