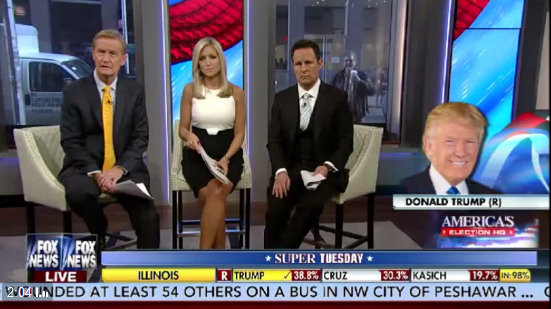 Trump To Skip Next Debate On Fox News [VIDEO]

A hit on this morning’s Fox & Friends on Fox News took an unexpected turn when Donald Trump made a startling announcement regarding the upcoming GOP debate… which is set to air on Fox News. “Nobody told me about the debate,” said Trump during his phone interview, revealing that a longstanding commitment — a speech to what he estimates is “eight or nine thousand people” on the night of March 21 — is preventing him from attending.

“No, you know who loves them? The networks,” clarified Trump. “Haven’t we had enough?” he asked at one point. The network announced the debate on Monday. Fox News anchors Bret Baier, Megyn Kelly and Chris Wallace are set to moderate the event, which Fox has announced will take place in Utah at the Salt Lake Convention Center. “Would you consider reconsidering?” asked Kilmeade. “You hit me with it yesterday… so I’m not going to do the debate,” said Trump.

“I’m not going to be doing the [@Foxnews] debate.”
–@realDonaldTrumphttps://t.co/D8DofXStMZ

Previous On The Math For Trump To Win Nomination
Next BARBADOS: Hate Group Leaders To Conference On Thwarting LGBT Rights In The Caribbean