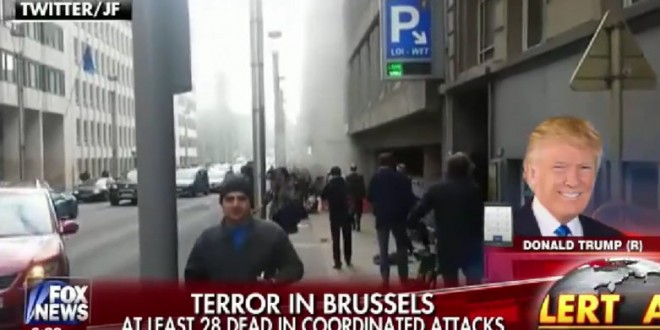 To no one’s surprise, Donald Trump immediately exploited the attacks in Brussels this morning by calling into every network that would have him. From his call to Fox News:

“I would close up our borders to people until we figure out what is going on. Look at Brussels, look at Paris, look at so many cities that were great cities. Paris is almost as bad. If you look at Paris – Paris is no longer the city of lights. Paris has got a lot of problems. And all you have to do is speak to the people who live there. You look at other places where this same thing has happened.

“And they’re in fear. Their city is in fear. And we have to be smart in the United States. We’re taking people without real documentation. We don’t know where they’re from, who they are. If you look at it from any standpoint. It could be ISIS. It could be ISIS-related. And we just don’t learn, we don’t learn. I mean, Brussels is an amazing example. Brussels was an absolutely crime-free city, one of the most beautiful cities in the world. And now you look at it and it’s a disaster.”