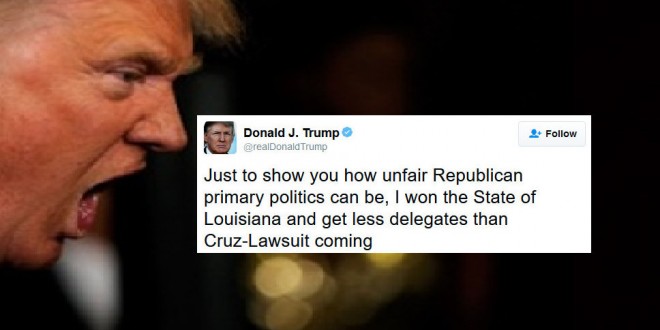 Following a report that Sen. Ted Cruz (R-TX) may win more delegates in Louisiana’s primary than Donald Trump, even though Trump won the state, the Republican presidential frontrunner threatened to file a lawsuit on Sunday. Trump complained about the “rotten political system” during a Sunday interview on ABC’s “This Week.”

“The Republican tabulation system is a broken system. It’s not fair,” he said. “I won Louisiana and now I hear he’s trying to steal delegates,” Trump added, referring to Cruz. “What’s going on in the Republican Party is a disgrace. I have so many more votes and so many more delegates.”

According to the Wall Street Journal, Republican in Louisiana expect the five unbound delegates that had been awarded to Sen. Marco Rubio (R-FL) to back Cruz now that the Florida senator is out of the race. Cruz’s supporters have also secured key positions on convention committees, which could help the Texas senator at a contested convention, according to the Wall Street Journal.

The Louisiana GOP responded yesterday to Trump’s threat by saying, essentially, “Bring it.”

Previous Ivanka Trump Has Baby Boy
Next POLITICO: Teabagistan Is Ready To “Pounce” If Republicans Cave On SCOTUS Nomination Hearing