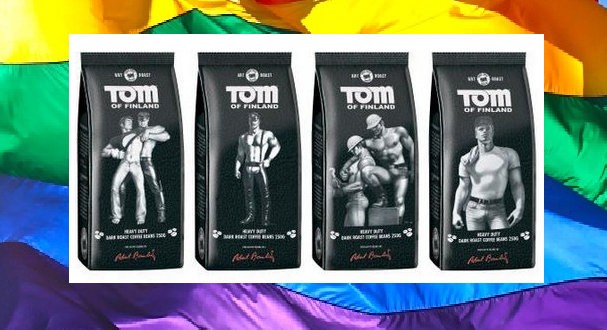 Tom Of Finland: The Coffee

Preparing a cup of morning joe won’t be the same when the Robert Paulig Roastery launches its line of coffee products enclosed in packaging featuring the risqué figures created by Tom of Finland.

The company released a press release in which it described Touko Laaksonen, also known as Tom of Finland, as one of the country’s best-known Finnish cultural influences and one of the world’s most important artists.

The company is to roll out its new Tom-flavoured brews in two options: filter coffee and whole roasted beans, each of which will be available in packages featuring four different illustrations of Laaksonen’s trademark beefy male subjects. The Roastery remained faithful to the homo-erotic theme by naming the products Built Bold and Heavy Duty.

The coffee isn’t yet available on the Paulig website. (Tipped by JMG reader Ken)