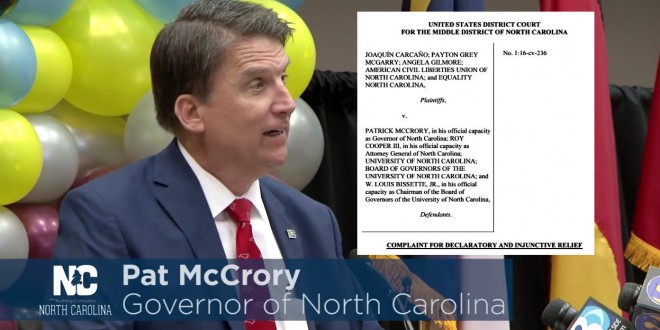 The Lawsuit Against North Carolina Has Been Filed

Early this morning North Carolina was sued in federal court over the recently signed law which overturns LGBT rights statewide and bans transgender citizens from using public facilities that align with their gender identity. The suit was filed on behalf of three individuals and two LGBT rights groups. Buzzfeed News has details:

“By singling out LGBT people for disfavored treatment and explicitly writing discrimination against transgender people into state law, H.B. 2 violates the most basic guarantees of equal treatment and the U.S. Constitution,” the lawsuit argues.

The complaint argues the law violates people’s equal protection, privacy, and liberty rights under the Fourteenth Amendment to the U.S. Constitution and their civil rights under Title IX of the Education Act of 1972.

The lawsuit is asking for a declaratory judgment that the law violates the Constitution and Title IX and an injunction against enforcement of the law.

The defendants include Gov. Pat McCrory, Attorney General Roy Cooper, and the University of North Carolina and several of its senior officials.

The American Civil Liberties Union, ACLU of North Carolina, Lambda Legal, and Equality North Carolina are all backing the litigation.

The suit further contends that HB 2 deliberately evades the landmark 1996 US Supreme Court ruling in Romer V Evans, which struck down a Colorado constitutional amendment which singled out gay citizens for discrimination. Unlike Colorado’s law did, North Carolina’s HB 2 does not explicitly exclude gay Americans from its list of protected classes, it simply does not name us. Similarly evasive laws have also recently been enacted in Arkansas and Tennessee.