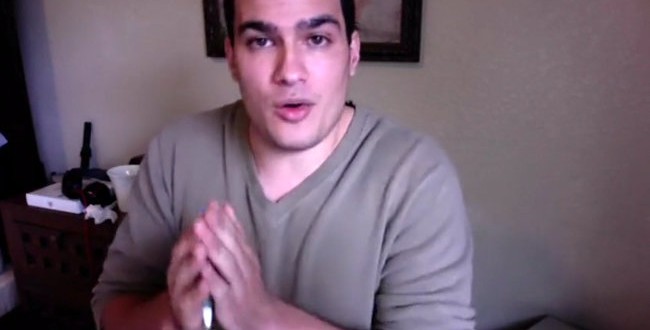 Peter LaBarbera was blocked from entering Canada, and he goes before the media showing how persecuted he is, but yet he wants to block me — a Christian — from being in a documentary for being more politically incorrect than him. And at the same time, he kisses the feet of the sodomite to deny me as Peter denied Christ.

A filthy sodomite who calls himself “Joe My God”, began to attack LaBarbera for being in the documentary with me. Peter LaBarbera quickly went on Twitter to appease the sodomite, even going to far as to address him with the blasphemous title of “Joe My God”:

Why would a Christian address an evil person with such a blasphemous title as “Joe My God”? It is truly pathetic how these modern Christians get on their hands and knees for these useless sodomites. The sodomites make up such a small part of the population, and yet the Christians, who are supposedly the majority, are terrified of them. Caesar wanted the whole world to address him as kyrios, or lord. And yet you never see any of the early Christians ever address Caesar as kyrios.

In fact, St. Paul went directly against this idea when he said “that every tongue should confess that Jesus Christ is Lord” (Philippians 2:11), that is that Christ is Kyrios. Yet this Peter LaBarbera wants to do an inquisition on me, firmly saying “We need to look at the exact comments” and “We need transcripts of the exact comments and then he [Theodore Shoebat] needs to disavow that approach”, while at the same time he runs to some sodomite to get his approval.

What an absolutely pathetic person. Peter LaBarbera does not want to respect God, but rather “Joe My God”. This is why the Christians keep losing ground and the sodomites keep gaining ground. Instead of using the attention that controversy brings, Christians run away from controversy. This is why Christendom is drowning.

I guess I won’t be getting any tweets from Shoebat, since that would be his acknowledgement that JMG IS HIS LORD.

RELATED: The above-mentioned film was produced by anti-gay kook Janet Porter, who is now running for the Ohio House. Let’s hope her opponents get wind of her star declaring that Jesus would personally beat homosexuals to death.

Previous FLORIDA: The End Of The Road For Rubio?
Next Rafael Cruz To Breitbart: Donald Trump Will Appoint Pro-Gay SCOTUS Justice And Destroy America [AUDIO]