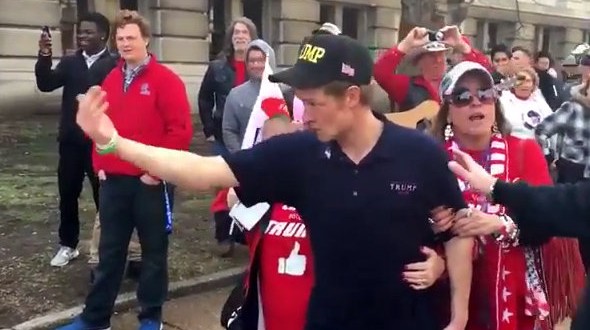 Another rally, more hate — again. Donald Trump’s protest-filled campaign continued with a bloody stop Friday in St. Louis, where several protesters were tossed from the event, including a black man hauled off by police with a bloodied face. The bellowing blowhard’s gathering at the Peabody Opera House downtown was interrupted several times, prompting Trump to go off-message to address each dust-up.

“Get him out,” Trump is heard saying on one video as a protester is pulled out by police. “Go home to mommy.” The protests, the unabashed billionaire told the masses, “add to the flavor.” “Our country has to toughen up!” he said as yet another person was led out of the ornate room, which features a balcony. “They’re allowed to get up and interrupt us horribly and we have to be very gentle,” Trump said. “They can swing and hit people, but if we hit them back, it’s a terrible thing.”