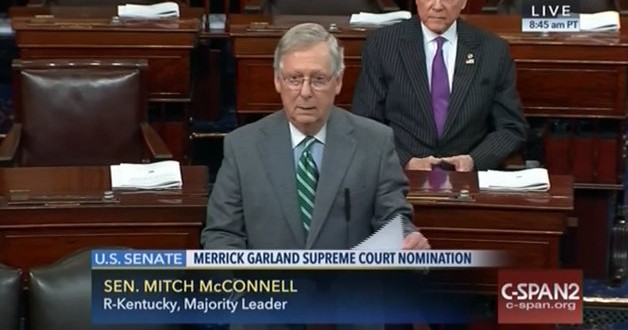 Senate Majority Leader Mitch McConnell (R-Ky.) on Wednesday shot down the idea of Supreme Court nominee Merrick Garland getting a hearing. McConnell insisted in a floor speech that the vacancy should be filled by the next president. “The next justice could fundamentally alter the direction of the Supreme Court and have a profound impact on our country, so of course the American people should have a say in the court’s direction,” he said.

“The Senate will continue to observe the ‘Biden Rule’ so the American people have a voice in this momentous decision. The American people may well elect a president who decides to nominate Judge Garland for Senate consideration. The next president may also nominate somebody very different. Either way, our view is this: Give the people a voice in filling this vacancy.”

Speaker Paul Ryan (R-Wis.) stood by McConnell’s decision. “This has never been about who the nominee is. It is about a basic principle. Under our Constitution, the president has every right to make this nomination, and the Senate has every right not to confirm a nominee. I fully support Leader McConnell and Chairman [Chuck] Grassley’s [R-Iowa] decision not to move forward with the confirmation process. We should let the American people decide the direction of the court.”

Previous David Duke: Comparisons To Donald Trump Will Rehabilitate The Image Of Adolf Hitler [VIDEO]
Next Trump Predicts Riots If He Doesn’t Get Nomination