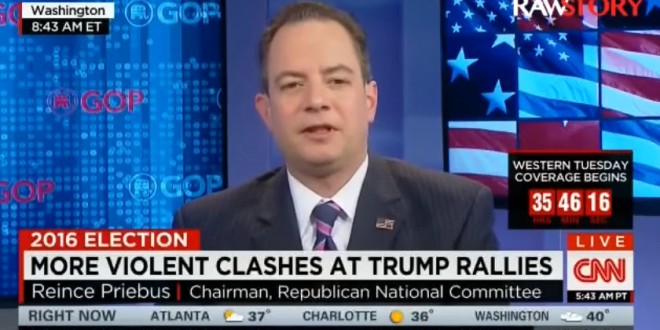 Republican National Committee Chairman Reince Priebus on Monday charged that CNN was fueling violence at Donald Trump’s rallies by spending too much time reporting on violent incidents at his campaign events.

After a weekend of protests and clashes at Trump rallies in Utah and Arizona, Priebus told CNN host Alisyn Camerota that Trump had “called for the temperature to be cooled.”

“But look, we’re not a party that believes in violence,” Priebus opined. “I think violence begets violence. And I think you’ve got to leave some of the work in the crowd up to the professionals.”

The RNC chair added that if he was “being fair” then he also had to criticize the media’s coverage.

“When cable shows are on a constant loop on a couple knuckleheads pushing each other, in a 24/7 loop, you know, you create an environment, I think, that just adds fuel to the fire,” Priebus charged.