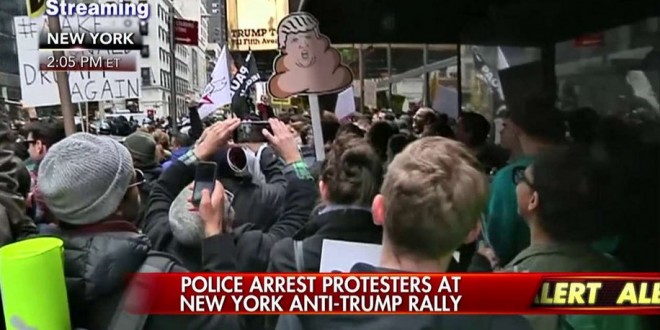 Thousands of protesters gathered in front of one of Donald Trump’s signature Manhattan buildings Saturday to protest the GOP front-runner. The protesters waved signs and played drums. They planned on marching toward Trump Tower, the Fifth Avenue skyscraper near Columbus Circle where Trump lives.

Some protesters at the event told 1010 WINS’ Samantha Liebman that they couldn’t believe Trump has come this far in the election, and that they believe his rhetoric is divisive and racist.

“We’re here because Donald Trump is the antithesis of what America stands for,” one Westchester man said. “We gotta make sure we get out and vote and make sure our voices are heard,” another protester from Manhattan said. One sign read “Love Trumps Hate.” Another read, “Will trade 1 Donald Trump for 25,000 refugees.”

Donald J. Trump has made headlines in recent months with his divisive rhetoric, hate speech, and extremist plans to “make America great again”. We, in fact, believe this will do the opposite to this nation. Trump’s policies threaten many of us in the Black, Latino, LGBTQIA+, Muslim, and other communities. These policies and type of speech has no place in this country, and certainly does not have a place in the city that Trump grew his empire in–a city known as a melting pot and home for many of the same people Trump continues to wage war on. Join us at Columbus Circle as we march to Trump Tower and say NO to hate, NO to divisiveness, NO to fascist policies, and most importantly, NO to Donald J. Trump.

Previous Tom Of Finland: The Coffee
Next Inside The Response To Hillary’s AIDS Gaffe