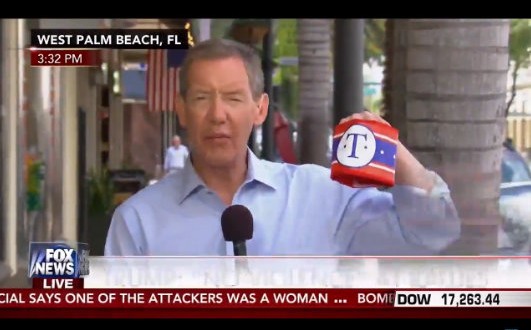 Remember the guys who burst into a Ted Cruz town hall and attempted to perform an exorcism? And the guy who stood up at a Marco Rubio event to declare that Rubio had stolen his girlfriend? Well, those same pranksters achieved the ultimate today when they got Fox News to report that Trump supporters have begun wearing Nazi-esque armbands. Watch below. The pair hasn’t limited their pranks to GOP candidates, recently they were seen sitting behind Hillary Clinton’s stage wearing official-looking “Settle For Hillary” t-shirts. Previous Dr. Stabby Gets His Payoff: I Will Serve In An Advisory Capacity In The Trump Administration [VIDEO]
Next Hamilton Star Raps At White House [VIDEO]