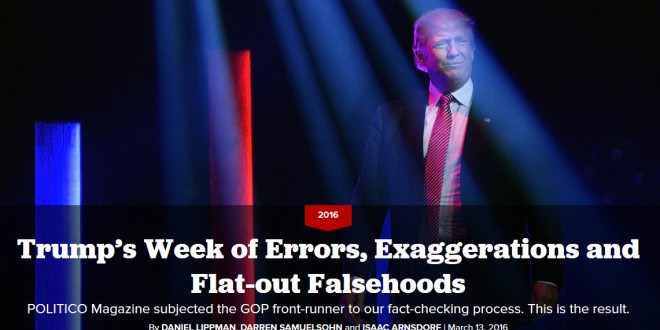 And that’s JUST in the last week. Via Politico:

With the GOP front-runner scooping up delegates in a march toward the Republican nomination, POLITICO subjected a week’s worth of his words to our magazine’s fact-checking process. We chronicled 4.6 hours of stump speeches and press conferences, from a rally in Concord, N.C., on Monday to a rally on Friday in St. Louis.

The result: more than five dozen statements deemed mischaracterizations, exaggerations, or simply false – the kind of stuff that would have been stripped from one of our stories, or made the whole thing worthy of the spike. It equates to roughly one misstatement every five minutes on average.

From warning of the death of Christianity in America to claiming that he is taking no money from donors, the Manhattan billionaire and reality-show celebrity said something far from truthful many times over to the thousands of people packed into his raucous rallies.

His remarks represent an extraordinary mix of inaccurate claims about domestic and foreign policy and personal and professional boasts that rarely measure up when checked against primary sources.

Hit the link for a complete listing of all the lies.